Twitter, LINE, Facebook etc…. There are so many Social Networks in our life. On the other hand, 1 day is 24 hours which does not change. Then we decide how we use our time.

I heard that many Japanese have stopped watching TV. When I was in Japan, I turned on TV as soon as I came back to my home. At the same time, I turned on PC as well. While I ate dinner, I saw TV and searched on the internet. I assume that’s one typical life style for a single life. I was crazy about TV although it was not useful or fun. 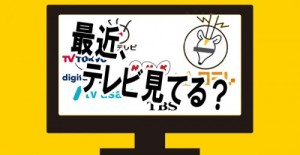 The article says that saying “I don’t watch TV” is a trend in Japan. On the other words, we can say people who watch TV are not so cool. As I mentioned above, ‘Watching TV’ reminds us that ‘You’re alone that you have nothing to do except for watching TV’ and ‘The people can get information only from TV. They don’t have enough resources to know the recent trend.’

I think that’s very typical Japanese way of thinking. We estimate people’s preference and thoughts based on their lifestyle. It seems that we have so many options what we can do in our life. However if you do anything different from a majority, you would feel isolated and people surrounding you would estimate you a lonely person.

Although there is so many things, trend, tools and information, Japanese still prefer to doing the same thing as other people do. That would be a good news if you came to enter Japanese market. There is still one consistent trend in Japan as long as you capture the trend.

Be careful, the trend may come from TV even though TV becomes unpopular media 🙂
That’s Japanese mystery.

Here is the good reference.
Seven & i Holdings Co., Ltd who is one of the biggest retail group in Japan is going to spend 10 times of 2013 for internet ads. They have spent 100 billion JPY for their total marketing. The internet ads was just 1% of the marketing in 2013. They will increase it to 10 billion JPY in 2014.

They understand as a big advertisor TV is still a mass media and useful advertising space. Based on their experiences, when they combined TVC and internet ads, the CVR would increase 5 times of users who did not see TV.

06/02/2014 semjapanese_meg Comments Off on Japan: 26th in global English proficiency